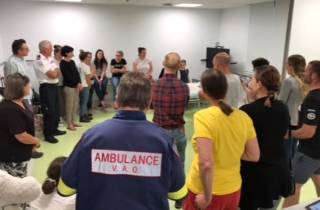 The popularity of Tasmania’s growing mountain bike industry is not just being felt on the trails themselves.

The state’s emergency departments have also experienced a spike in presentations related to mountain bike trauma, with an increase in the number and severity of injuries presenting to the Launceston General, Scottsdale and St Helens hospitals.

In an effort to ensure health professionals on the front line are best prepared, late last year a team from the LGH ED and primary health led a mountain bike trauma training day at St Helens.

With about 40 participants, organiser Stu Davidson said the initiative was aimed at increasing awareness around mountain bike trauma and ensuring staff on the state’s East Coast had the capabilities to deal with it.

“The type of mountain bike riding in Tasmania has also changed with enduro style riding becoming popular and jumps getting bigger,” he said.

“Mountain bike injuries can be far more serious then the rider’s story sounds.

“The LGH ED has done work around educating their staff in mountain bike injuries and we could see the benefit of offering this to St Helens and Scottsdale in particular.”

Mr Davidson said while mountain bike injuries had always been a reality for health professionals in the ED, with increased popularity Mr Davidson said it was important to staff remained prepared.

“Because it has become so much more popular two things have happened. We are getting more and more fringe injuries and weird things that happen, just because there are more people doing it,” he said.

“And because more people are doing it, you also tend to get a bit more lax about it. You think, ‘oh it’s just another mountain bike injury’. But some of them are quite significant.”

Following the success of last year’s event, Mr Davidson said it was likely a similar training event would be rolled out in the North-West, and also the South.

“It takes a lot of people with a wide range of skills and a lot of time, but everyone sees the benefit,” he said.

Was Derby a victim of its own success? – The Tasmanian Examiner – February, 2022

Bike trail plan a salve for many but there’s a tiny fly in the ointment – The Age – 4 February, 2022